The 1st ever OTR Exposure MLK Classic was one to remember. During a season like this, getting teams to play quality games has been tougher than ever, I’m thankful for the eight programs that participated.

Friday’s action kicked off the event as Create Academy took on Spring Creek Academy. It was my 1st time seeing Spring Creek play and I was thoroughly impressed with coach Mounir Benzegala’s squad. They have length, skill, and athleticism, along with some of the most intriguing prospects in the state. Early on in the 1st half Create Academy got going behind the hot hand of Jojo Johnson, a junior guard, who hails from California. He scored 15 1st half points, knocking down six 3’s. SC rode the hot hand of 6’7 senior Lav Cvetkovic. who led all scorers with 11. Geronimo De La Rosa went into the half with 9 points, but his on ball defense, which was stellar, is what got my attention. SC would take a 41-34 lead into break. I tip my hat to Create Academy, having only 5 players is tough, and they managed to keep this game closer than you can imagine. The second half continued to be owned by Cvetkovic, as he managed to go 3/3 from deep to finish with a game high 24 points. Alex Tysnkevich came alive in the 2nd half scoring 12 points for SC. Spring Creek also set the record for having the most consonants in their last name’s of any team I’ve seen in a long time! LOL Create Academy got good contribution from 6’10 big Didier Maleng, as he finished with 13 points and 6 rebounds. Five star big man Lee Dort grabbed 10 boards and scored 8 points. Johnson finished with a game high 25 points, and I liked his offensive “bag”. Look forward to seeing him this spring and summer. 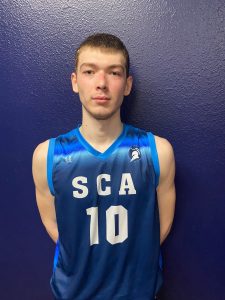 The second game of Friday’s double header was a great way to cap off the 1st day as both of these teams competed till the very end. TACA’s 6’7 juniors Robert Jennings and Jason Thirdkill were very impressive in the 1st half, both knocking down two 3’s and showing their extreme versatility. Thirdkill went into the half with 12 points and Jennings scored 10. RWG Stem was paced in the 1st half by 6’5 junior guard Zach Lee, who was aggressive on both ends of the floor finishing with 13 points in the 1st half. I loved his activity, and his willingness to compete. 6’3 junior Noah Goines also was big for RWG, scoring 8 points in the half as well. He too was on the glass, and made plays on the defensive end. TACA would lead RWG going into the half 34-25. The second half was a thriller as the undersized RWG team didn’t back down at all and made this game very exciting. Tyler Mitchell and Austin Nunez got going for TACA in the 2nd half, scoring 14 and 10 points respectively. Thirdkill took over for his team, scoring 11 points and grabbing 7 boards to finish with a big time double double of 23 points and 12 rebounds. He went an impressive 5-8 from 3. RWG would cut the lead to 3, as Lee kept getting busy and Carlos Clater joined the party, scoring 13 points in the half. RWG Stem is a team that eye will be keeping my eye on. 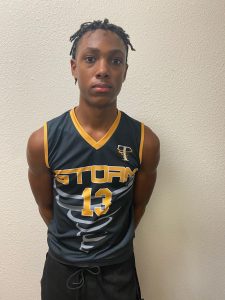 The 1st game on Saturday gave me a chance to see one of the best prospects in the country, Dallas Kimball’s junior guard, Arterio Morris. Premier Academy played without its best prospect, 7′ junior Dok Mourdar. Premier Academy came out in the 1st half with intensity and was energized. Junior guard Sam Curtis got going early, hitting three of his 1st five 3’s. 6’7 Junior David Gai was all over the glass in the 1st half, grabbing 5 boards to go along with his 10 points. Senior guard Will Young scored 8 points and dished out 3 assists in the half, as Premier jumped out to a 8 point advantage early in the 2nd quarter. Kimball was paced early on by 6’6 junior Chauncey Gibson who scored 10 points, hitting two 3’s. Morris didn’t really get going until he and Premier guard Cory Barnes started chirping at each other a little bit. Morris would go on a spurt scoring or assisting on six straight possessions to finish with 8 points and 2 assists in the 1st half, as his team trailed 34-36 at halftime. The 2nd half is when Morris would take over the game, scoring 23 points and had several ESPN top 10 play moments, including a one hand windmill down the lane. Gibson finished with 16 points for Kimball and showed why his recruitment will be picking up. Premier Academy would make all of the crucial plays down the stretch, as their big 3 of Young, Curtis, and Gai would pace them to the six point win. Curtis finished with 16 points, knocking down five 3’s. Gai had a team high 20 points, and Young scored 19 in the win. 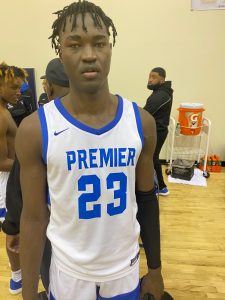 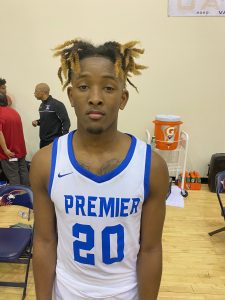 Excited about getting a chance to see FFA again this season. They played in Houston vs Shadow Creek earlier in the year but wasn’t at full strength. Junior guard Dallas Hobbs was hot as fish grease early, hitting three 3’s, and scoring 12 points in the 1st half. Brandon Walker was impressive for FFA, showing his size, strength and skill. He had 9 points, and 5 boards at the half. Four star prospect Jordan Walsh scored 7 points, 5 rebounds, and a poster dunk in the half. I think he’s one of the best two players in the country. Junior PG TJ Caldwell scored 6 points, dished out 3 assists, and had arguably the top play of the event, with a two feet, bunny hop explosive dunk, on a GVA defender. The half was all Faith Family, as they would take a 83-63 win on their home floor. Walsh finished with a game high 17 points and 7 rebounds. Walker scored 13 and grabbed 7 boards, Hobbs finished with 12 and Caldwell 11. Micah Glover 13, and sophomore Justin Scott 9, were the bright spots for Good Vision Academy, who get a lot of props for coming to play the defending 4A state champs on their home floor. Speaking of state championships, that’s exactly what FFA will win this year, as their is no team in the state on the 4A level that can compete with this group.