Day 1 of the Christmas Crossover was everything I expected it to be and more. There was some usual suspects who played well, and some players and teams that played suspect. Montavious Murphy showed why he’s the player of the year right now in the city in the city after his performance against Holy Spirit. Kevin Baker and Jo Valrie were also impressive, and RJ Keene made a big splash in a big moment. Here is the recap of Day 1.

Sulphur Springs dominated the 1st half behind 6’5 2020 F Sadairiene Hall and senior guard Keaston Willis who scored 11 points going 3-7 from three. Kevin Baker was a man amongst boys with 10 points of the 21 his team scored. Sulphur Springs started the 2nd half on a 9-4 run led by Grayson McClure’s three 3’s! Sam would close the gap behind Marlon Jackson and Chris Green attacking the basket. Sam would close the gap to five, 50-45 with a buzzer beater by Tj Mingo. The press of Sam Houston forced turnovers of Sulphur Springs, and the pressure was too hot, and Sam Houston would tie the game and send it into overtime.  In OT SS executed better down the stretch to win 69-65. Hall finished with a “Big boy double-double”, 10 points and 18 boards! Keaston Willis finished with a team high 20 points. Green scored a game high 21 for Sam Houston, followed by Baker with a 20 point/10 rebound double-double. 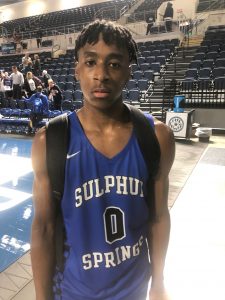 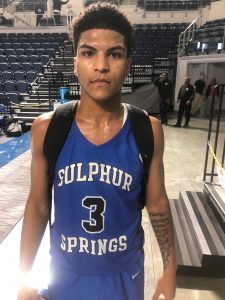 Eisenhower came out aggressive early, leading 10-9 after the 1st period behind Ja’Mare Redus’ six 1st quarter points. They flew around and played tough team defense, neutralizing the superior size of the ISchool. The second quarter both teams picked up their energy as Ischool outscored the Eagles 18-17, and the game was knotted up 27-27 at the half. 6’7 Quevian Adger & 6’11 Jonathan Aku started to use their size advantage in the 2nd half, giving Ischool several second chance opportunities with their offensive rebounding. Both would have doubles doubles this game, Adger 14points, 12 rebounds and Aku 13 points and 13 rebounds. Eisenhower picked a tough time to go cold, missing on four straight possessions in the 4th, and Ischool would take the lead and never look back. Redus scored a team high 17 points for the Eagles, followed by Patrick Punch’s 10. The sniper for Ischool, Petar Krivokapic, went 4-7 from 3, scoring  17 points. Kevin Credit Jr had 12 points and 5 assists. 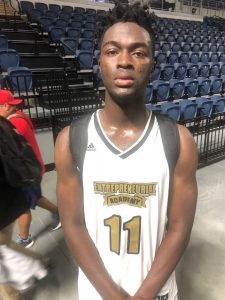 Two scrappy, hard nosed teams that both play with something to prove. I figured who ever executed down the stretch the best would win. A sloppy, tightly contested 1st quarter as both teams seemed to struggled to get going. Byron Joshua of Crescent City got his teammates going with some impressive dimes for easy lay ups and open open shots. Houston Christian would find their rhythm in the 2nd quarter, Kobe Haynes knocked down a pair of triples, and Noah Kon pushed the pace to give the Mustangs a 40-32 lead at the break. The 3rd quarter belonged to Joshua and Trayslon Wilburn of Crescent City, the duo scored 17 of the 25 points in the quarter for their team. Kon, Archibald, and Haynes would keep Houston Christian at arms reach of CC in the 4th with their big shots, and great execution the last few minutes of the game. Crescent City was led by Joshua who finished with 26 points, 9 assists, going 17-20 from the line. Three of his teammates also were in double figures, Wilburn 19, Jordin Farrell 13, and Glenn Rhone with 11. Noah Kon stat line was 18 points, 7 rebounds and 5 asissts, Archibald had a game high 23 points, and Haynes also had 18.

I figured Ischool would be a little fatigued after a tough game against Eisenhower, and with a short bench, I didn’t think they would have much left in the tank… it was quite the opposite. It seemed like Episcopal was the team playing their second game, lacking intensity and energy. Ischool came out clicking on all cylinders, racing to a 26-16 1st quarter lead behind the hot shooting of Kevin Credit and Tyree Hood, who went a combined 4-7 from 3. D’Avian Houston and Adam Kanafani would keep the Knights within arms reach scoring 10, and 11 points in the 1st half. The 3rd quarter was much of the same as Ischool continued to pour it on, feeding the ball inside to Johnathan Aku for easy baskets in the paint. I school would run away with this game with a 82-59 win, five of the seven players scored in double figures. Credit with 21, Hood 15, Quevian Adger 15, and Petar Krivokapic 11. The Knights were led by Houston’s 17, Kanafani 15, Jahari Long 13, and DJ Nussbaum scored 10 points.

The anticipated game of the night. The #1 player in the country Anthony Edwards, and his Holy Spirit Prep team taking on arguably the top team in Houston, Concordia Lutheran. Everyone came to see Edwards, but Concordia would steal the show with it’s light out shooting and big time performance from Montavious Murphy. Coming out in a 1-3-1 zone, they slowed Edwards down a little bit as he was trying to get his teammates involved early. Once he figured out how to pick his spots in the zone he quickly got in his groove, finding his best shooter, DeAndre Brown for some open looks. You could tell CL was well prepared for this game, and their game planned worked as they spread Holy Spirit out defensively, penetrated the gaps and found open guys. Sophomore RJ Keene had a big game going 7-13 from the floor, including three 3’s, and finished with 19 points. Senior guard Pierce Hellums also scored 19 points, hitting five 3’s. Evan Palmquist had a game high 10 assists. But the game belonged to Montavious Murphy, he played about as well as you can in a game like this. He played with energy and passion, embraced the moment. He had a game high 31 points, and 14 rebounds. Edwards finished with 24 points, 14 rebounds, and 5 assists in the loss. Brown scored 24 also in the losing effort. 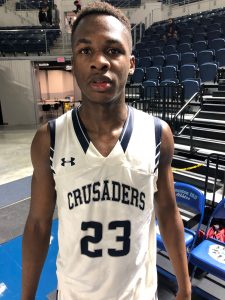 This was going to be a tough match up for Texas Christian due to the style of play of Yates. Even with elite size as a team, when playing 3rd Ward High , you always need a couple of guys with high IQ and the ability to handle the ball under duress. The pressure of Yates would force 25 1st half turnovers for the Tigers, causing them to fall into a 43-26 hole at the half. Jo Valrie and Carnel August got it going early for Yates hitting two triples a piece. Texas Christian showed some brights spots in this one as 6’10 Mo Ngom would finish with a double with 15 points and 13 rebounds. Freshman Austin Benigi 14 points, and Leyder Moreno 13 points and 8 rebounds. August finished the game with 14 points, Rubin Jones scored 10 points, and had 7 assists. Valrie scored 33 points and grabbed 12 rebounds, he is really been playing well this year. Every time I watch him, I like him even more. I’m not sure what position he is, I just know that he’s a player, and he always gets stuff done! 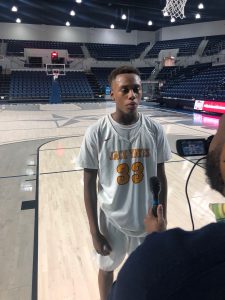