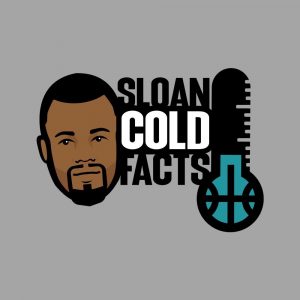 This year’s Super 16 had some really good matchups. I was impressed with how well some of the teams have been playing, despite limited practice time and gym availability. Here are some #SloanColdFacts about the event.

Some of the games I observed..

First time seeing BU, the 1st thing you notice is how much command that super soph Wesley Yates III has now. I love the way he’s trending upward. He looks the part of the lead guard and he played really well. Junior Terrance Arceneaux proved to be versatile for Bush. 6’9 ’23 Tyler Smith was a bright spot for Bush, he was the only one in double figures with 11. His frontcourt mate 6’9 senior Brandon Love was aggressive on the glass and inside for the Broncos. BU, as always, is going to be tough.

Manvel played the reigning 6A state champs tough for a while. Having to play Duncanville is a challenge in itself, but having to play them in the 3rd game of the day is tougher than day old donuts. Duncanville has a winning culture and it shows, everybody has a role and buys in. Zhuric Phelps got busy with 27 points & 11 rebounds. ’21 Damon Nichols 21, ’21 Juan Reyna 16, & ’22 CJ Ford 13, were the double figures scorers for Duncanville. Manvel was paced by ’21 Zaire Hayes, who really carried his team, scored 20 points. Big fella Shaun Walker had 18 and 9, and Azari Woods scored 10.

Again, when you have the culture of winning like Duncanville, it’s hard to rattle them or get them out of what they do. Shadow Creek has the personnel to match up, but the cohesion of the unit isn’t there yet and it shows in their play. ’22 Cam Amboree made some timely shots, scoring 15. ’22 Shawn Jones Jr finished with 14 & 6, and played with a lot of activity. ’21 Brian Gordon was efficient scoring 12 points with 4 assists, and Ramon Walker also scored 12. I like this SC team, I think they have a chance to make a run at a region title. ’21 Juan Reyna was cooking with the good grease for Duncanville scoring 23 points. 6’6 ’23 Ronald Holland scored 18, & Zhuric Phelps finished with 16.

I thought the size of Premier Acadmey would give BU fits, but the scrappy team out of the 409 used their speed and quickness to their advantage. This was a really good game, and the high level players, “22 Dok Muordar, ’22 David Gai, ’23 Wesley Yates, & ’22 Terrance Arceneaux all put their stamp on the game at some point. This contest came down to a game ending buzzer beating trey by Yates III.