My 1st ever EYBL experience was eye opening to say the least. The one thing I immediately noticed at the 12 court Lakepoint facility was the impeccable Nike branding, it was everywhere and all in your face. Secondly, the star power.. Lebron James, Coach K, World Wide Wes, and 121 of the 185 ESPN ranked players all in the building. There was a major buzz in the air all weekend.

The Houston Hoops, one of the EYBL’s signature grassroots organizations, would head into the event without their highest ranked player, LJ Cryer (43rd in the 2020 ESPN Rankings). With many of the players seeing their 1st EYBL action, many were unsure how they would perform. The 1st game Friday night was against ProSkills out of Dallas featuring Micah Peavy, formerly of Dekaney HS. The Hoops would jump out to an early lead in this game and during the 3rd quarter trailed by 13, until the 4th quarter where they fought back and was a defensive rebound away from winning the game, taking a 79-76 loss in the opening game. Kenneth Lofton Jr was huge inside finishing with a 14 point and 11 rebound double double. Tramon Mark finished with 13, Braelon Bush 11, and Langston Love finished with a team high 20 points.

The second game Saturday morning vs MEBO Team Hood (Mississippi), was very similar to the ProSkills game in where the Hoops jumped ahead early after the 1st quarter, and then struggled in the 2nd quarter defensively to find themselves trailing at the half. They would also lose this game by three points, 88-85, despite a monster effort from Love as he went for 27 points, 5 rebounds and 4 assists. Bush 13 points, 5 assists, Mark 12 points, and Nate Martin finished with 10 points and 8 boards.

Finally starting to get in their grove they put together a more complete game vs Team Final in game 3. They never trailed in this game going up 48-35 at the half. The ball movement was better, but more importantly, their transition defense was better. That was their Achilles heel in the 1st couple of games, they just gave up too many transition buckets. Team Final would make it interesting down the stretch but the Hoops would wind up winning this game 90-86. Love 19, Bush and Mark with 15 a piece, Reuben Fatheree with 14, and Lofton Jr would round out all double digit scorers with 13.

The final game vs Bluff City was the “Braelon Bush Show”, the Silsbee star exploded for 23 points, going 5-8 from 3 point land. The Hoops held serve defensively early in this game only allowing 6 1st quarter points. They would never trail this game, running away with a 78-62 win to close the out the 1st session. Love and Fatheree were the only other double figure scorers this game with 13, and 10 respectively. 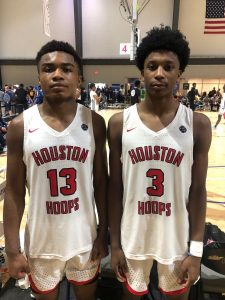 A lot of credit has to be given to coach Tim Schumacher, who coached his butt off having to coach both 16’s and 17’s, and guiding the top group to a 2-2 record without LJ Cryer. It will be very interesting to see what happens when their full team takes the floor.

Speaking of of the 16U Houston Hoops, the finished the 1st session 3-2. The 16U format of the EYBL is a little different than the 17’s. They play pool games and then go into a bracket format each session. They started a little slow losing their 1st two games to LivOn Fluer de Lis (73-66) and Nightrydas (68-62) in games that they could have won. They defeated Drive Nation 77-62 for their 1st victory in the 3rd pool game. I really like the progression of this group. Demari Williams is the team’s leading scorer and becoming more of an alpha on the court. Chris Felix had a solid weekend, making plays, knocking down shots and being great in transition as usual. Big fella Shaun Walker was a load inside all weekend, averaging 15 points and 7 rebounds. RJ Keene, who struggled with his outside shooting, was really good defensively and excellent on the boards! They wound up winning two more games after the Drive Nation game. Their next stop will be in Dallas May 24-26, I look forward to them playing well and qualifying for Peach Jam. 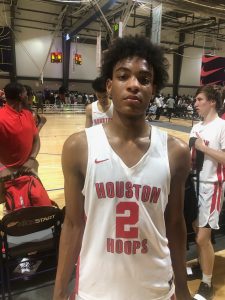 I have to mention the Hoops 15’s, which is primarily made up of 2023 players. This team was slated to be one of the top 8th grade teams in the country before they were moved up and asked to play on the big stage at the EYB 15U level. They had a really tough schedule, and went 1-2, with a big win over rival Houston team JL3 Elite (64-58). They have some really good young talent put together by Clyde Jackson and coached by Alex Franklin and Orlando Horton. 2022’s Chancellor White and Amir Turner played well, and 2023’s Christopher Lockett, Chris Johnson, & Tyler Ringgold also got busy and got valuable experience on a big time platform!