Yesterday’s showcase games were competitive. We were just happy to be able provide a platform during the pandemic for teams that were in another event that got canceled. Three quality games featuring teams trying to find their identity early on in the season.

Low scoring game that saw St. Pius jump out to a 10-0 start, due to senior guard Jason Johnson getting going early, and holding CHSM to three points in the 1st quarter. CHSM would fight back and go on a 10-0 run to take the lead 13-10. Guard Kyle Roach got in his facilitator bag and led the charge. His play was very Khalid El-Amin esque, handling the ball & making the right reads to find his teammates for easy baskets. He finished with a game high 8 assists. St. Pius rallied the troops and take a 24-16 lead into halftime. They would hold on to the lead the rest of the game and claim a four point victory. Johnson was outstanding in the win, finishing with a game high 26 points. Nathan Alvarez added 10 points and 8 rebounds as well. John Stamps was the lone double digit scorer for CHSM, finishing with a 10 point and 11 rebound double double.

12th ranked Level Up got going in this one behind the hot shooting of Micah Glover, who went 2-2 from 3, and scored 10 points in the 1st quarter. Legacy seemed a little shell shocked to start the game only scoring 7 points in the opening quarter. The physicality of Level Up gave them the early advantage and they took a 22-7 lead after the end of 1. The second quarter was the beginning of the Quentin Ivory show. The dual sport star imposed his energy and motor into his team, scoring 8 points and grabbing 6 rebounds in the quarter to go into the locker room with a 11 point 11 rebound double double. His team still trailed Level Up 42-25. Legacy came out in the 3rd quarter and matched the intensity of Level Up, Sophomore Gary Rebolledo was tough on the offensive glass and finished well inside. Legacy would cut the lead 11 but Zion Obalnla & Xavier Calhoun took over the second half for Level Up powering them to the 18 point win. Glover would lead Level Up with 16 points, and Ivory had a monster game for Legacy, finishing with a grown man double double of 36 points and 18 rebounds. 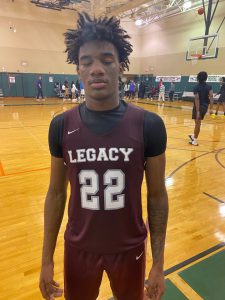 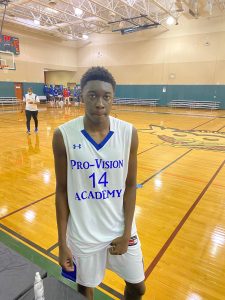 This was a game of halves, Premier jumped out early behind Will Young’s playmaking and David Gai’s hot shooting! Gai, the 6’7 junior went 6-6 from the field in the 1st half scoring 15 points. Young finished with 7 assists in the 1st half. TWCA had no one in double figures and looked outmatched as they trailed 40-26 at the half. The 3rd quarter belonged to Austin Benigni, as he took charge and scored 9 of his teams 14 points in the quarter. Chanse Perkins was also big on the boards, grabbing 4 in the quarter and limiting second chance points for the Premier Academy bigs. Premier would still have a 10 point lead, 50-40, heading into the 4th. The last period TWCA blew the roof off Fallbrook with their late quarter hot shooting. Ballyhooed freshman Zion Pipkin struggled for 3 quarters, but came alive in the 4th knocking down 3 game changing threes, including deep back to back ones. They would outscore Premier 26-11 in the 4th to take the five point win. They also surprisingly out rebounded the bigger Premier Academy team 39-29, led by Cedric Cook’s 9, including 15 offensive rebounds. Gai would only score 3 points in the 2nd half, finishing with a team high 18. 7′ Dok Muordar finished with a 13 point, 12 rebound double double. Young also had a double double of his own, 11 points 10 assists. For TWCA, Benigni he scored a game high 22 points. Perkins had 17 points and 8 boards. Pipkin finished the game with 11 points. 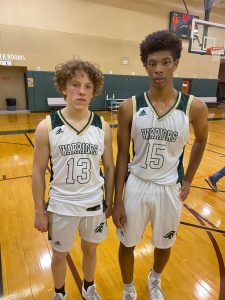