The latter games of the Stars & Stripes Day 2 were interesting because of the individual match ups. Noah Kon vs Jaja Sanni, Quevian Adger vs Nate Lacewell, and Jimel Kofer vs Tyler Pinder. I think it’s important that kids understand the importance of individual match ups and how they affect the success of the team. The thing I was most impressed with was the branding and look of the event. This event did a lot of things differently from what you see at normal high school showcases, hats off to Teddy Wheeler, Rhossi Carron, Eastbay and Adidas basketball family.

Ischool came out and used it’s size right away early in this game. Getting into the lane and dropping it off to big man Johnathan Aku for easy dunks, he had a game high of 21 points. Aku is one of the more physically gifted bigs in the state, he rebounded the well to the tune of 14 boards against the smaller Legacy school. The match up I was looking forward to was iSchool’s 6’8 2020 Quevian Adger vs 6’8 2020 Nate Lacewell of Legacy. Two players with similar builds and styles of play. In this round Adger got the better of Lacewell, he finished with 12 points, 8 rebounds and 4 assists. He played above the rim, catching two spectacular alley oops, and he also attacked from the wing in the half court set. I can tell he’s trying to make the full time transition to wing. Lacewell knocked down an early 3 pointer in the 1st quarter, that was his only bucket of the game. In situations like these I need to see more production and more aggression on both ends of the floor. 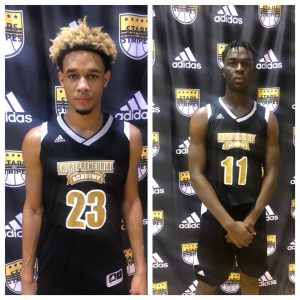 This was a physical intense game, as two well coached teams played very hard. Both coaches were on the refs and their kids the entire night, there were 18 charges called, some loose ball scuffles, chippy play, all things that point to competing. The individual match up I had my eye on was HC’s Noah Kon vs Clear Lake’s Jaja Sanni. Sanni, and the defensive pressure forced Kon into some early turnovers and Clear Lake jumped out to a 14-5 with Casey Davis and John Argue leading the way. In the 2nd quarter Kobe Hayne got it going for HC hitting two 3’s and a long 2, scoring all 8 of his points in the period. Davis and Argue kept the Falcons with a cushion scoring 4 point each making little hustle plays on the 50/50 balls. Elijah Bernstein and Ty Archibald got the Mustangs rolling in the 3rd, hitting two big 3’s to cut the lead to 36-33 after three quarters. After waiting for 24 minutes, Noah Kon decided to step up and put his team on his back, He scored 9 points before picking up his 5th foul with about 3 minutes to play. It would be a costly one as Sanni and Davis took advantage of Kon’s absence and scored 6 straight points to seal the game. 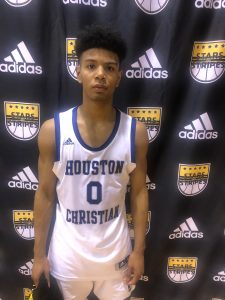 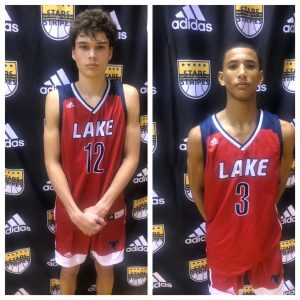 My second chance to get a look at the loaded Universal team out of Dallas. I knew about Arthur Kaluma and Jaylin Posey, but I forgot that 6’4 sophomore Jimel Cofer also wen there. He quickly made me remember scoring the 1st 10 points for his team, knocking down three corner jumpers and one monstrous dunk on the break. He has good size and a nice skill set, plays a lot harder now than when I saw him this spring. Another 2021 prospect Kaluma showed that he’s more versatile than I thought, often bringing the ball up an initiating offense, but he didn’t neglect the fact that he’s 6’8 and still grabbed 8 rebounds, he finished with 12 points. 6’8 Jaquan Scott finished with a double double of 12 points, and 12 rebounds for Universal. Tieny Madit of Redemption had a game high 13 points, and 6’2 sophomore Tyler Pinder caught my eye with his shooting and play making ability, scoring 7 points and some nice dimes to Madit for easy baskets. 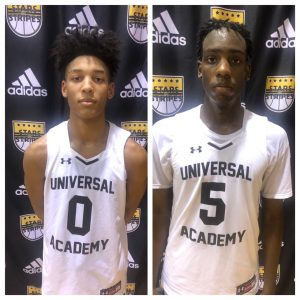