This news hits little different for me because I’ve been knowing him since he was a skinny freshman at Alvin HS coached by Aaron Proctor. I also had the privilege of coaching him with the Houston Defenders in the spring/summer of 2016. The 6’7 forward averaged 13.9 PPG, 7.7 RPG, 2.3 APG, and shot 46.7% from the field, including 33.8% from 3. He will not initially sign with an agent, leaving the option open of returning to school. I wanted him to describe his thoughts on the process and how it will impact his future in College Station. 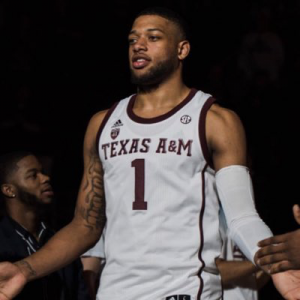 How did you come up with this decision?

SF: “Many conversations with my family & loved ones, coaches, and a decent sophomore season.”

Did the departure of coach Kennedy have any affect on this decision?

SF: “The departure of coach Kennedy had nothing to do with this decision, this is something that myself and coach Kennedy talked about, and we talked about it before we knew he was leaving or the media even knew of him leaving existed.”

What are you looking to gain from NBA personnel?

SF: “I am looking for feedback from the direct source, I want to hear exactly what they want to see from me & what I can do to be a future elite NBA player & help better my current teammates.”

Have you talked to Buzz Williams & what’s your take on him as the new coach?

SF: “I feel that coach Williams is the perfect guy for the job. His work ethic since he has been here is outstanding and I really trust what he has in store for us.”

What position do you see yourself playing in the NBA?

SF: “I feel as though I’m a position-less player, with my versatility of being able to guard multiple positions.”

I’m happy for the kid and his development, with his 20th birthday on the horizon, oozing with potential, and the chance to learn what NBA scouts feel about him… I have no doubt he’ll hear his named being called on draft night, whether it’s this year or the next we’ll soon find out.