Magic Johnson called the playoffs “Winning Time”, and that’s exactly what time it is right now for a few greater Houston area basketball programs. The UIL regionals are here and I’m breaking down the teams that are left standing, starting with 6A region III, 6A region II will be next, followed by 5A region III and 4A region III.

Northshore– I’m not sure what’s in the water on the east side of town, but the basketball team is picking up right where it’s gridiron counter parts left off. Coach Sam Benitiez has his crew ready to make a run to San Antonio, led by it’s senior front court of 6’7 Jalen Means and 6’5 Keiman Capers, the Mustangs knocked off a tough Dawson squad 34-30 to land in the regionals. This defensive minded group can win ugly or pretty, & pride themselves on toughness and physicality . They have the daunting task of playing a high powered Elkins team in the semis.

Why they can win the regional– The pride of the east side. Something happens to kids when they see their peers succeed at a high level. Their elementary & middle school classmates winning the state football championship has rubbed off on them, & the sense of pride they have in not letting themselves or their community down has pushed this team to play harder & smarter. 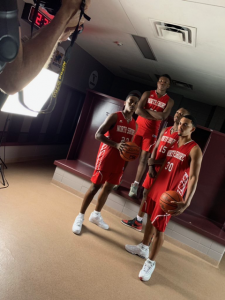 Elkins– No stranger to the regionals, this Knights squad is talented, battle tested, and is led by one of the better coaches in the country, Albert Thomas. Texas signee Donovan Williams, fellow senior Collin Warren, and super soph Jacobi Harris have this high octane offense playing at an unbelievable pace, averaging 75 points per game in playoff wins over Katy Taylor, Lamar, and Morton Ranch. It will be interesting to see the contrasting styles clash in their match up with Northshore.

Why they can win it all– They’ve been here before. They have played against top notch competition from all over the country this season, and held their own. No game will be too big for them. Coach Thomas has trusted each of the players in his rotation at some point in this season to make a play to help them win a game. Donovan Williams and crew won’t go out without a fight and they seem to be on a mission to get to San Antonio. 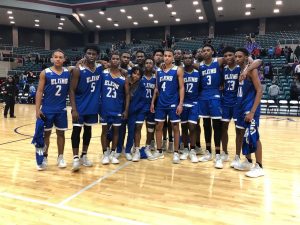 Bush– They say it’s always tough to follow a legend, head coach Brandon Gay heard the whispers all year long about how replacing hall of famer Ronnie Courtney would be difficult. But all he’s done is just let the wins do the talking. Despite being the underdog in the last two playoff games, the gritty Broncos have come out with victories over Spring Woods, and tough, experienced Sam Houston team. Junior guard Dj Stewart is the engine of the team and the savvy point guard has his team playing defensive minded, efficient basketball. The back court match up with George Ranch will be fun to watch.

Why they can win it all– No one expected them to be here except the the 12 kids on the team and the coaching staff. So they’re playing with house money. They can guard, they’re tough, and they are opportunistic. They capitalize off of mistakes, and play at their pace. They want to keep the game in the 50-60 point range, and grind out possessions. A recipe for success in win or go home situations. 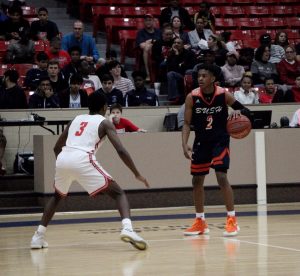 George Ranch– George Raaaaaanch?! *Soulja Boy Voice. A lot of people were surprised to see them here, but if you’ve been paying attention the duo of  Noah Thomasson and Dalon Dean, you know they have really been getting to it all year. They are both direct extensions of coach Charlie Jones, who at one time, many, many, many moons ago, was a great lead guard himself. They are a high octane group who can score in bunches. With wins over Summer Creek and Beaumont United, they are definitely the “Cinderella” in this regionals.

Why they can win it all– The glass slipper may actually fit. Guards win games in the playoffs, and they have the best back court in the region. Coach Jones has these guys playing loose, and pressure free. They are great in transition, and keep you on your heels at all times. Their clock may not be striking midnight anytime soon. 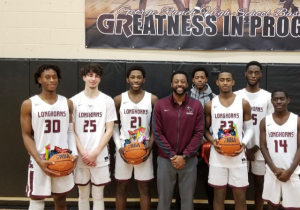