When I say it’s “Houston vs All Y’all”, I really mean it! I picked Klein Forest to beat Ike and take the area championship, but I knew going to Dallas and beating two really good teams with really good players in Rockwall, & South Garland would be tough.  Very few thought they could do it, but they came back to the H with a 6A region II championship!

The Golden Eagles got started on Friday night with a 7-68 win over Rockwall, four players were in double figures. Corey Robinson had 12, Daylan Hamilton 12, Calvin Solomon 18, and Kharee McDaniel led his team with 19 points. They had a big lead evaporate after Rockwall began to put their full court press on and cut the lead to three points with a two minutes left in the game. The Golden Eagles would prevail and end the career of McDonald’s All American and Louisville signee Sam Williamson. If that game weren’t enough they would have to contend with South Garland, a team with it’s own McDonald’s All American in Tyrese Maxey, and his back court mate Chris Harris, a Texas A&m pledge. KF would take a 1st quarter lead of 15-9, keeping Maxey scoreless. They would never relinquish the lead and defeated South Garland 64-53 preventing Maxey and Harris a return trip to the Alamodome. The 6’8 Calvin Solomon, who has been tremendous in the playoffs, led Klein Forest with 24 points and Dylan Hamilton added 16 points. The one thing this showed me is that Kharee McDaniel and Solomon are the leaders but KF is more than just these two guys, their coach Cary Black has these guys playing so hard and they’re extremely locked in. Corey Robinson, Marion Williams, Dylan Hamilton & Daylan Hamilton are just as dangerous, & they play with a chip on their shoulder. 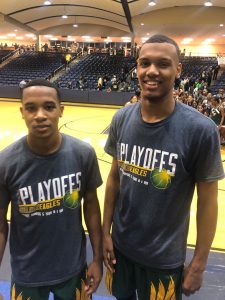 Friday night in San Antonio they play a good Cibolo Steele(San Antonio) team at 8:30. I predict them to win this game, and face the winner of Northshore vs Duncanville in the final. We could possibly see an ALL HOUSTON FINAL!