Skip to content
The 2021 “Stars & Stripes” event was held on the campus of Houston Christian high school over the weekend. The event brought in several high level players and their respective high school teams. A slew of college coaching staffs were represented including Baylor, Texas A&M, Rice, TCU, SMU among others. Historically this has been a premier showcase for players to emerge as stars while earning their stripes. I have gathered a list of the top performers from this past weekend.
6’3 Jaquan Saunders (Our Saviour Lutheran)
Saunders is a prototype New York guard. He possesses the obligatory swagger and confidence to impact any game the moment he steps on the court. The Seton Hall signee has tremendous range and is great in the open court. Saunders has good size and feel which lends itself to multi positional versatility. He was able to set the table for his teammates and was a reliable scorer all weekend. Felt like I was watching an old Big East game when he was on the floor.
6’3 R.J. Jones (Pope John Paul II)
One of the top junior guards in the country, he made more shots than a bartender this past weekend. His calling card is shot making off the bounce and his exquisite ability to do so was on full display. He hit fade aways, side steps, step backs, pull ups, runners, floaters and scored at the rim. He was one of the most impressive performers I saw last weekend. (#24) 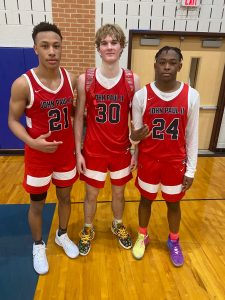 5’10 Brody Robinson (Houston Christian)
Cult hero Brody Robinson plays with fire and a fierce competitive spirit and is always in attack mode. Whether on or off the ball, he has the ability to be a dangerous weapon. He lit up Prestonwood Christian, cooking with the good grease on his way to a game high 33 points.
6’2 Austin Nunez (Wagner HS)
One of the leading scorers in the state of Texas, the Arizona St signee scored more than 60 points in two games. Hasn’t seen a shot he can’t make. Played with a ton of confidence. Gave a valiant effort in a loss to JPII and came back ready to play and led the troops vs Concordia t0 a win. Had the gym buzzing and he impressed all weekend.
6’6 Liam McNeeley (John Paul II)
There might not be a better sophomore wing in America than Liam McNeeley. A big wing that plays the game the right way. He doesn’t force shots and plays with a mature demeanor. McNeeley made threes from deep range and showed the ability to drive the ball and get fouled against elite defenders. I like his toughness around the basket. He will continue to improve his ability to finish the stronger he becomes. Even Stevie Wonder can see why he’s considered a 5 star prospect.
5’9 Montana Wheeler (Houston Christian)
Pace, poise and production from the prodigious point guard from Houston Christian. Led his team to a gritty win vs a tough Good Vision Academy team with 22 points and 6 assists. Followed that up with a 13 point and 9 assist game in which HC rallied from 17 down with under 2 minutes to go to send the game into O.T. All of the aforementioned staffs stuck around Friday night to get a first hand progress report.
6’6 Sadiku Ayo (Our Saviour Lutheran)
Ayo (Iona signee), had a great showing. Showcasing his 3 and D abilities, he plays with a tremendous motor and does a workman like job on the glass. He can grab and go to initiate the break and finish through contact. His ability to guard all 5 positions impacts winning at a high level.
6’5 Chanse Perkins (Woodlands Christian)
The Army signee’s production is tied to his activity. He plays with a sense of urgency on both ends, flew around, and created havoc for the other team. He brings his athleticism to the game and made several plays above the rim. He was too much for Prestonwood Christian and helped secure the win vs Westbury Christian HS.
6’4 Gabe Warren (John Paul II)
Every time I see him he looks better and better. Great motor, good defender, tremendous IQ. Scored 20 points in the opening game for JPII. He’s trending upward due to his ability to make shots, and his willingness to rebound from the guard spot. One of the stock risers in a loaded 2023 class in Texas.
Top Girl Performers:
6’2 Zachara Perkins (St. Pius X)
Looks the part of a future McDonalds All American. Like the queen on a chess board, Perkins can play all over and go anywhere on the court and find success. She scores in a multitude of ways. Off the bounce, makes catch and shoot threes and can post up. A bonafide mismatch on the high school level. Perkins finished the night with an event high of 38 points to go along with 12 rebounds. This was a star in the making performance even though her team suffered a loss. 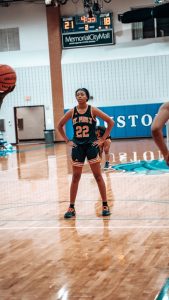 6’2 D’Asia Thomas (Houston Christian)
Thomas typically offers opposing coaches a dilemma. Put a smaller player on her and she posts up, place a bigger body and she shows off her improving offensive package or go zone and she plays everywhere your defense can’t find her. All while rebounding at a high level. Pick your poison. It was business as usual (29 points) for Thomas at Stars and Stripes. Definitely one of the brightest stars at the event.
5’10 Loghan Johnson (Houston Christian)
Coming off a 40 point performance earlier in the week Johnson was terrific on both ends. Playing harassing defense while causing turnovers, making shots on the perimeter, scoring at the rim and making life easier for her teammates. She is a potential 5 star recruit and All American candidate.
Others Stars Who Impressed:
Austin Benigni – 5’10 Point Guard
(Woodlands Christian)
Nigel Walls – 6’9 Forward
(St. Francis)
Dylan Drake – 6’7 Forward
(Prestonwood Academy)
Wyatt Boeker – 6’7 Guard
(Woodlands Christian)
Christian Jones – 6’4 Point Guard
(Our Saviour Lutheran)
Charles Yao jr – 6’5 Guard
(Good Vision Academy)
Vinny Sigona – 6’0 Guard
(Prestonwood Academy)
Jalayah Ingram – 5’9 Guard
(Houston Christian Girls)